It is not a secret that nowadays time has become the most valuable thing that people often try to save by cutting down minutes and hours wherever possible.

Travelling (especially business) is when we try to do so the most. However, the phrase "you can't buy time" might not be exactly correct if we look at it from a different perspective. If you book a private jet instead of choosing an airline option and get to your destination faster, doesn't the paid price logically includes the saved time?

In this article, I will try to introduce you to the best ways that private flying allows us to save time. I will describe the process from the very start of your journey to the arrival at the set destination. Continue reading and find out why private flights are considered to be so time-saving!

When you book a private jet, it often includes the pick-up service. A driver will come to pick you up and drives you to the airport or from the destination back home.

Now let's think of how many people, who use the services of commercial airlines, decide to take local transport to the airport instead of getting there by car, to avoid paying for expensive parking?

If you also choose this option, you should add extra time to take into account possible bus or train delay, regular bus stops to let all passengers out and indirect routes to the airport in order to collect more people on the way.

Lines. Lines. Lines. Getting bored. Hungry. Feet hurting. No to mention the time you waste while waiting in a line to go through all of the check-up processes before a commercial flight!

Long lines are the main thing that rips people out of their beds earlier and forces them to arrive at least an hour or two before their scheduled flight. Just imagine another hour of sleep instead of standing until you pass all the check-up posts.

Private flying is an option that allows you to save time in this situation. The best part is that arriving 20 minutes in advance of the departure time at the VIP terminal is sufficient. There are no baggage or security lines that you have to pass. You're always the first. Isn't that just perfect?!

Talking about the situation in Europe, there are around 3000 airports where private aircraft can land and take off and there are only about 300 airports that are suitable for commercial airline aircraft.

Keep in mind that private jets require less space for transportation. Due to this reason, both international and also smaller airports with shorter runways are available for private aircraft. A bigger number of airports equals a better chance of getting closer to your destination and can save you even hours in some cases!

Speed is another factor that can relate to saved time while travelling by a private jet. These aircraft can often develop faster speeds than planes that are used for commercial flights. Private jets are lighter and they will reach their cruising level quicker compared to commercial airliners. Cruising at a higher altitude means that it is convenient for radar control to monitor the air traffic and grant shortcuts or directs.

Furthermore, private jets rarely take any stops (unscheduled ones) because most of them fly directly to their destination and don't deviate from the set course. However, if a passenger schedules a cross-country flight, some time will still be saved as private jets are faster to get from one point to another, compared with a commercial airline aircraft.

It is very important to arrive at the set destination on time, especially for business people who have important meetings to attend. Due to our fast-moving world, a lot of entrepreneurs decide to take a short flight instead of going by car to another country in order to save time.

Commercial airline flights can sometimes fail you with delays that can happen due to a variety of circumstances. You can easily get your flight postponed one or two hours that might relate to missing an important meeting. That's bad, right?

Some great news is that delays with private flights happen so rarely that you would probably not even have a chance to experience one during years of flying private. A busy runway is almost a non-existing condition for private aircraft because the traffic in secondary airports is not that intense as it would be with a commercial flight using a busy and congested airport. 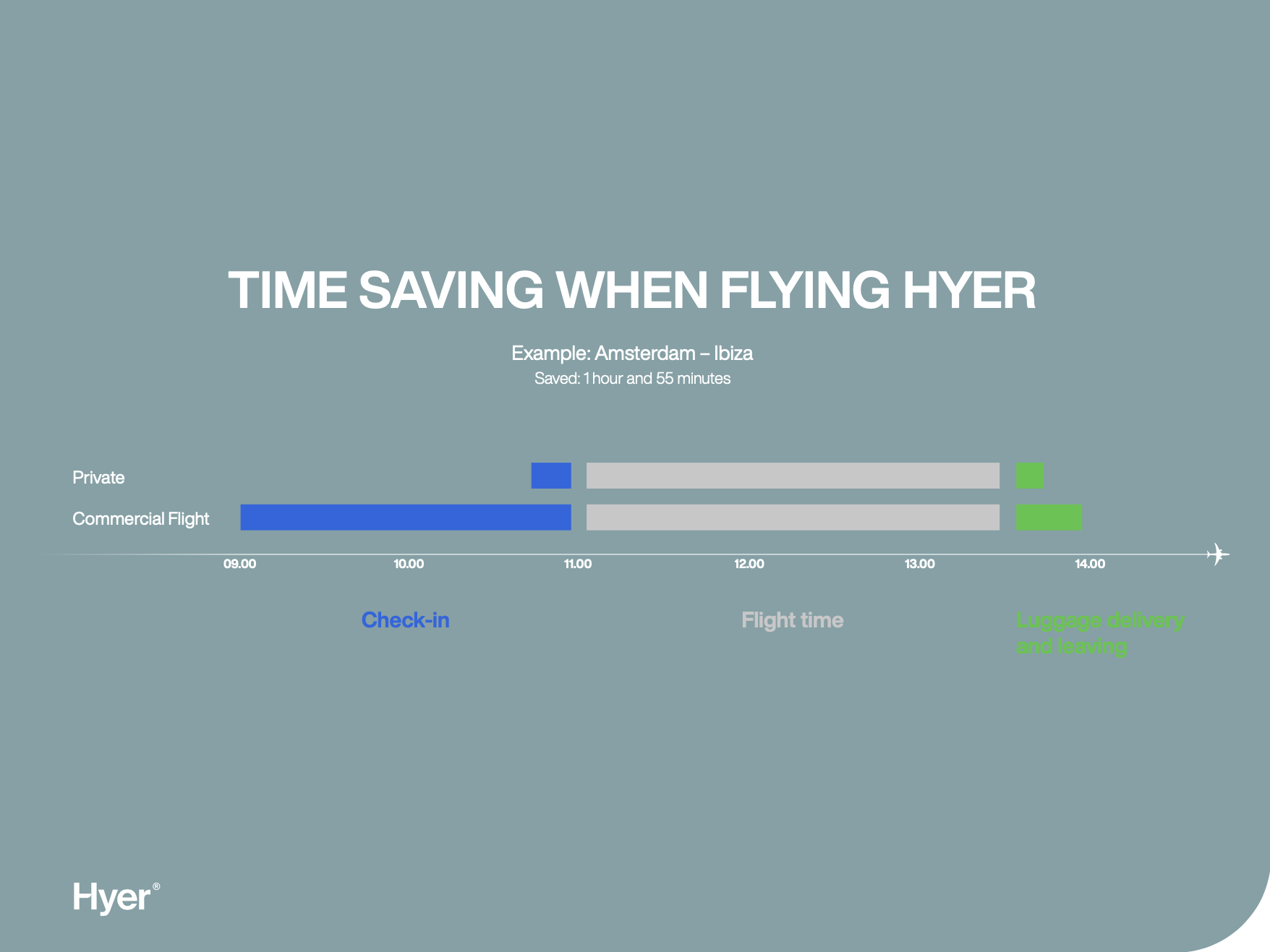 According to research, private business travel in Europe allows people to save approximately 2 hours, and this is just the average number of saved time! In some situations, flying private might appear even more beneficial and give you another extra 3-4 hours!

As you have already read, there are many different factors that can influence the amount of time you can save while opting for private flight services, rather than flying with commercial airlines. However, it is only up to you what type of flying you prefer more.

The most important thing is to enjoy your wings wherever you go.